I’ve needed reminders lately. Lots of them. No, not little, yellow sticky notes reminding me to get peanut butter. Although sometimes I need those, too. But lately I’ve been looking a bit too far down the road. You know, peering at the worries on the horizon. Wondering what storm clouds might be brewing. I hear the future rumbling, and I don’t like the sound of it. Doubts. Fears. A need–dare I say a demand–for some answers, ricochet around in my head like thunder rolling ahead of the storm.

But God, in His gentle sovereign way, has been whispering to me.

“So Jacob rose early in the morning, and took the stone that he had put under his head and set it up as a pillar. . .” Genesis 28:18

Jacob had a dream in which God appeared and promised to make him a great nation in that land. Jacob’s response when he awoke was to take his pillow–that stone–and set it up as a reminder of God’s promise to him.

“Each of you is to take up a stone on his shoulder, according to the number of the tribes of the Israelites, to serve as a sign among you. In the future, when your children ask you, ‘What do these stones mean?’ . . . These stones are to be a memorial to the people of Israel forever.” Joshua 4:4-7

The Israelites had crossed the Jordan to take the land God had promised them. In God’s amazing, and always surprising way, He stopped the flow of the Jordan river, and the people crossed on dry ground. A man from each tribe was commanded to pick up a stone from the middle of the river, carry it across, and place them together as a memorial. A reminder to the generations of Israel of their great God and His power.

“Then Samuel took a stone and set it between Mizpah and Shen, and named it Ebenezer, saying, ‘Thus far the LORD has helped us.” I Samuel 7:12

Things looked bleak. The Israelites were facing a battle with the Philistines, and the Philistines were a fearsome enemy. The neighborhood bully, in a sense. But God, hearing the humbled cries of His people, routed the Philistines with thunder! Yes, thunder! What a mighty God we serve! And Samuel took a stone and placed it there as a reminder of God’s deliverance.

So as I look at some of the rivers I need to cross or the Philistines I think I may need to fight, He’s called me to look at the ‘standing stones’ of my life and remember. . .

. . . how He placed us in the thick of a city, St. Paul, Minnesota, a place I didn’t think I wanted to be. But that home brought us life-long Christian friends and directed us to a church we could call home. That small apartment caused us to depend on God and cling to one another.

. . . how He moved us to our home here north of Polk City. Definitely not where we were looking or the old farmhouse we desired. But He knew that someday there would be a church called Lakeside Fellowship, and He wanted us and this property to be part of that. And we have been so blessed.

So I remember. I look at some of the ugly ‘standing stones’ in my life. . .

And as I think on these and other ‘standing stones,’ I’m reminded of His faithfulness, His goodness, His perfect planning, His wise direction, His deep compassion, and His desire that I walk through every day with Him. My eyes, not on the horizon and the storm clouds ahead, but on Him–my ultimate Standing Stone. 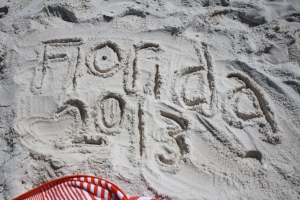 We returned from our spring break trip to Santa Rosa Island, Florida, a week ago having passed through the gauntlet of snow from St. Louis on northward. No, I don’t expect any sighs of sympathy as I know what wretched weather all Midwesterners endured here that week. My prayers for snow this winter far exceeded my expectations–as in “I didn’t expect this much snow in March!” But my prayers for glorious weather in Florida and a no-glitches vacation were amply fulfilled. I’m really not gloating or selfishly praising my answered prayers. Because, as we planned for this vacation, I was acutely aware that this might be our last ‘family’ vacation.

Oh, yes, there will be many more vacations with kids but perhaps not all of them together. Ethan is on the cusp of flight as he prepares for an internship in Washington D.C. this summer and then on to a four-year Army commitment. He is my wild bird, and I don’t know where he will land. So I prayed purposefully for this week. I prayed that our little, yellow cottage would be all that we expected it to be. 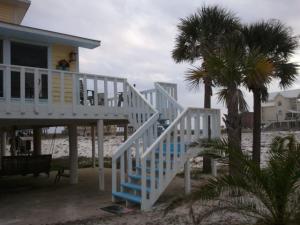 . . . a perfect home-away-from-home. Just a sandlots walk across from the beach, we quickly adopted an ‘island time’ routine of lazy mornings (unless, of course, you’re Thad who often got up to run) of coffee and a walk in the surf seeking shells.

Back to the cottage for lunch. And then return to the beach for sun and frisbee,  sandcastles and surf riding, bird feeding and, well, other weird stuff that my kids like to do.

That frisbee’s seen many states!

Couldn’t keep him out of the surf. 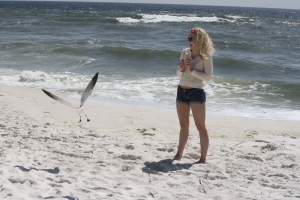 Tess experienced her own version of Hitchcock’s The Birds!

And I treasured every moment. Every sweet piece of time. This momma’s thoughts trickled back to other vacations burdened with pack-n-plays and diaper bags. Juice stained onesies and Goldfish crackers crushed in the seats. Pleas to go into “just one more” junked filled souvenir shop. Cries for the bathroom. Cries for food. Cries for sibling intervention! Remembrances of holding onto small hands on narrow paths and crowded parks. I smiled at the visions of talking a child into going on a roller coaster and that look of gleeful fear (I think it was gleeful fear. . .) at the first drop. My heart beats faster when I think about growing boys climbing cliffs much too big for their britches and making leaps of heart-stopping (mine!) proportions into the water below. And always there was a gangly-legged girl determined not to let her brothers get the better of her in any way. . . I guess that hasn’t really changed, though. Moments upon hours upon times of laughter and frustration and long car rides.

I don’t want to go down that well-worn path of enjoy-them-while-you-can-it-goes-so-fast. It’s trite, and it’s really not fathomable until you’re at the end of the path. What I’m surprised by is the letting go. If you’re any sort of parent worth your salt, you’re constantly in the thick of it–teaching them to work hard, to always do the right thing, to be a person of integrity and  honesty, to have a sense of humor, to look for people to help. So many things to teach, so many life-lessons to interpret, so many mistakes–mine and theirs’–to forgive and to show mercy and grace. There are no check marks for their hearts. Did I cover that? Did we really teach him the importance of this? But suddenly,  it’s time. It’s time for the first child to go. To me, it’s like the ominous door of the dentist room opening; they’re beckoning, “Your turn.” To him, it’s a parachute jump, a treasure hunt, and a challenge course all rolled into one. And it’s dotted with friends he doesn’t know yet. It’s the beginning of his adventure, and I wouldn’t clip his wings for anything. So I’ve been opening my hands, getting ready. Turning my palms up to God. Asking Him to take and then to fill. To reassure me of His perfect purpose in my life and in Ethan’s.

I still have three kiddos at home, though one is taking longer and longer test flights. And my heart is full with their joys and concerns and dreams and frustrations. But as I approach the ‘jumping off point’ with one, I know the others will follow closely behind. And though I don’t expect the opening of my hands to get any easier, I do expect and anticipate that God’s filling them with His joy and grace and purposeful direction will be all the more bountiful each time. I just need open hands.

God is kind in ways that will not fit my mind

Writing for Kids (While Raising Them)

A Journey with Music

A Peek into the Life of a Wife, a Mother, and a Daughter of the King

The latest news on WordPress.com and the WordPress community.